Are Fire Sprinkler Systems Effective as a Form of Fire Protection?

Home Are Fire Sprinkler Systems Effective as a Form of Fire Protection? 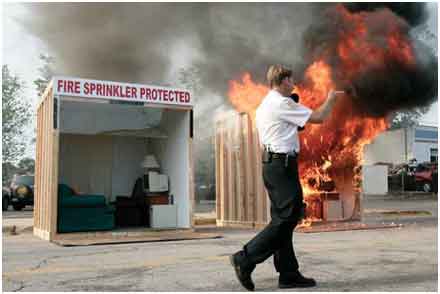 Let’s face it, money is tight.  Gas is going up, food is going up, movie tickets never seem to stop rising.  You don’t want to waste any more cash on things you don’t need.   So when you think fire sprinkler systems I bet the next thought is, “Is it worth it?”

To answer your question, yes it is worth it.  Fire sprinkler systems are an effective form of protection against fires.

Fire sprinkler systems are actually the most widely used fire protection system today due to the benefits of minimized damage, saved lives, and customizable installation designs.  Think of sprinkler systems as car insurance.  They’re both investments on standby should the day ever arise where you need them.

WHAT IS THE GOAL OF A FIRE SPRINKLER SYSTEM?

The goal of a fire sprinkler system is to use the right amount of water, in the right location, at the right time. Because of this, fires are usually diffused at the scene of the breakout, rather than growing throughout an office space or home to a dangerous size.

HOW MANY FIRE SPRINKLERS DO I NEED?

Usually, only one or two sprinkler heads are needed to handle a fire.  But also keep in mind fire sprinklers don’t move around.  So if you install a system in your office and not the office kitchen guess which spot is at risk?  The kitchen isn’t protected in any way thus making it a possible victim of fire damage.

BUT DO FIRE SPRINKLER SYSTEMS REALLY SAVE LIVES?

Ever hear the old saying, “It’s not the size, but how you use it.”  This verbiage applies directly to sprinklers.  Fire sprinkler systems are very effective at saving lives, as the fire is usually put out before it has time to spread and cause severe injury or death.  This is why so many people spend a few bucks to install them in their home and office.

Daryl is simply fantastic - her customer service game is top notch! I, of course, called with a minor emergency, and while their schedule was too packed to shoehorn a technician appointment for me the same day, Daryl was so kind, accommodating, and responsive that I will not hesitate to contact Aura when the next leak arises.

I hired Aura to test and certify the fire panels in 2 apartment buildings in SF. Sophath was professional (punctual, wore a mask, explained everything clearly) and a pleasure to work with. Turns out each building had a sensor/detector which needed to be replaced, so he had to return a second time. Despite that, the cost was reasonable, and I plan to use them for future annual certifications.

This company was great to work with. Quick response to my inquiry,arrived right on time for repair/troubleshooting ,excellent follow up and competitively priced. Would definitely hire again.

Vladi and his crew installed a fire sprinkler system in our two cottages that were newly built on our property in Berkeley. They designed the system and supplied the calculations along with the permits to the city of Berkeley, and completed the work which passed the fire inspections. Vladi was always a delight to talk to, very positive and always willing to work with me. I actually miss having a reason to call Vladi. And after they finished the cottages, we backed out of a contract to add fire sprinklers to the existing house, Vladi gladly refunded 100% of our deposit because of the stress I had endured this year. I will gladly use them in the future if and when I need to have our fire system serviced.

As a first time condo owner, it was very helpful that the technician explained what he was doing and what I needed to be aware about. This was super easy to schedule and quick service.

My Architect, Ahmad introduced Vladi, Aura Fire Safety for Fire system at Himalayan Pizza and Momo. We are very happy with their work and they clearly know what they are doing. Vladi often visits job site and see how things are progressing. Our fire inspection passed successfully at first time without any problem. Vladi and his team listen customer well and make sure everything is planned good before they start their job. I would highly recommend them for Fire system protection, especially for commercial business.

These guys were great to work with, professional, friendly, explaining the whole process of a 5 year sprinkler inspection. From the technician Chris who did the work to Carlyn in the office, it is great when a business still believes in customer service & are just genuinely really Nice people to work with!

Aura Fire Safety did a great Job. As a General Contractor, I routinely look for subcontractors I can trust to do thorough, timely work. I found my experience with Aura Fire to be smooth, timely and pleasant all around. Easy to work with in the field and office, I will certainly call on them again. TM

Great customer service. Very responsive. They installed an Ansul system for us and they were competitively priced, on time, efficient and cleaned up after themselves. Highly recommended!

We needed a backflow prevention system to be installed to an existing fire sprinkler for our TIC to condo conversion project. Aura was the first one of 5 companies to respond to my request for estimate. Of 2 companies who did respond to my request, Aura was less expensive. Vladi was very pleasant to communicate with for scheduling technicians and inspections and Jesse was very professional and did an excellent job and provided detailed info for maintenance. Highly recommended.

Very professional and attentive service. Vladi took care of my restaurant and got me through final inspections. Highly recommend!

Great Service!. Vlad and his team are top notch. Responsive, expert and trustworthy. They were easy to work with, very professional, showed up when they said they would, did the work the said they would and followed up to insure satisfaction. Could not ask for a better experience.

Aura Fire has replaced our fire sprinkler heads and perform our annual testings. They are very professional and always keep good communications with me throughout the process. Vladi and Jose are a great team. I would recommend them for your fire safety needs!

Our HOA started using Aura this year, and we are very happy with the service. Vladi and Jose both are knowledgable and responsive to our needs. We fired our prior vendor and hired Aura and have no regrets!